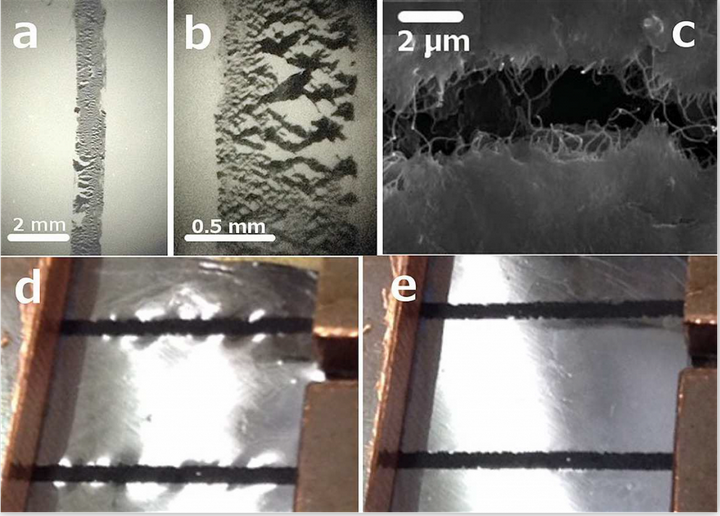 A fundamental requirement for the application of devices to the medical technology sectors is the biocompatibility associated with mechanical characteristics of elasticity and plasticity. Over the last three years, the UTV team has created and characterized polymeric materials, submillimetric flexible-plastic-extensible electrical conductors, for the extraction of cerebral corticogram signals aimed at guiding prostheses and diagnosing and treating epilepsy. The ultimate aim is to replace traditional metal electrodes for detecting the electrical signal from the brain, with detection points distributed with micrometric precision on a polymeric membrane that acts as a meninge. The techniques used for the characterization were optical microscopies, SEM, AFM, and conductance measurements as a function of deformation. Following the creation of the node, the UTV group intends to further expand the research and development of these new polymeric materials, flexible-plastic-extensible electrical conductors, particularly innovative in the most varied industrial sectors, such as electronics and information technology, rehabilitation and prosthetic medicine (prosthesis capable of acquiring signals directly in the brain, mechanical sensors), automotive and aeronautics, environmental sensors (anemometry, flowmeters, etc.), photovoltaics on sails and curtains, fashion (materials for clothes with designs and programmable and editable colors). In these areas, by way of example, the team is currently  determining the equivalent impedance according to its geometric shape, the deformation and the relative position of the electrical contacts, the development of systems for analyzing cortical signals for the identification of contributions independent of parameters electrode geometries, and the development of prototypes of antennas based on carbon polymer-nanotube composites for wireless communications. Tasks accomplished include: