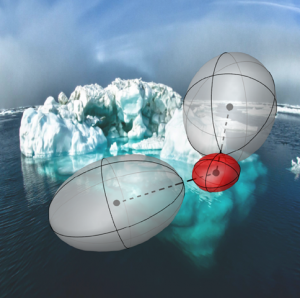 Even at room temperature, quantum mechanics plays a major role in determining the quantitative behavior of light nuclei, changing significantly the values of physical properties such as the heat capacity. However, other observables appear to be only weakly affected by nuclear quantum effects (NQEs); for instance, the melting temperatures of light and heavy water differ by less than 4 K. Recent theoretical work has attributed this to a competition between intra- and intermolecular NQEs, which can be separated by computing the anisotropy of the quantum kinetic energy tensor. The principal values of this tensor change in opposite directions when ice melts, leading to a very small net quantum mechanical effect on the melting point. This Letter presents the first direct experimental observation of this phenomenon, achieved by measuring the deuterium momentum distributions n(p) in heavy water and ice using deep inelastic neutron scattering (DINS) and resolving their anisotropy. Results from the experiments, supplemented by a theoretical analysis, show that the anisotropy of the quantum kinetic energy tensor can also be captured for heavier atoms such as oxygen. (The iceberg image in the Table of Contents and Abstract graphics was used with permission of the NOAA’s National Ocean Service, 2012