The material most widely used forelectrolyte membranes is Nafion, a perfluorinated sulfonated polymer (Figure 1). Because of its water assisted conduction mechanism, Nafion can be used only at temperatures below 100 °C [1]. For practical applications, however, operating PEMFCs at higher temperature is desired, both for hydrogen and methanol-fuelled cells. When hydrogen is used as a fuel, an increase in the cell temperature above 100°C produces enhanced CO tolerance, faster reaction kinetics, easier water management, and reduced heat exchanger requirement. The use of methanol as a fuel for vehicles has several practical benefits such as easy transport and storage, but the slow oxidation kinetics of methanol and its crossover through the membrane reduce the efficiency of direct methanol fuel cells (DMFCs). Therefore, increasing the operation temperature of proton conducting membranes is a key issue in the development of PEMFC technology [2,3].

The strategy followed by researchers of NAST Centre is to develop organic/inorganic hybrid membranes in order to achieve the goal of obtaining PEMs capable to operate at temperatures up to and above 120°C . Organic/inorganic hybrids are investigated for a variety of applications, ranging from optics to electronics, to sensors and many others, since they offer the possibility to combine the properties of the two components in a unique material [4]. Thus, we have studied nanocomposites where inorganic materials were added to a polymeric matrix, either of Nafion or of totally aromatic sulfonated polymers. In the case of polymeric electrolytes, the addition of nanocrystalline oxides is effective in improving ionic conductivity, mechanical strength, and thermal stability [5]. Since performance is strongly influenced by the filler particle size, we developed a simple and versatile route for the preparation of ceramic oxides with nanometric grain size [6]. MxOy (M = Ti, Nb, In and Zr) were synthesized by rapid hydrolysis of an alcoholic solution of metal alkoxides. The preparative conditions were optimized to enhance the reaction kinetics leading to fast nucleation and favoring the formation of nanoparticles. Figure 2 shows the TEM micrograph of TiO2 (chosen as a representative example) obtained by thermal treatment of the sol-gel precursor at 500°C. The particle size was in agreement with the XRD measurements (12 nm), although the presence of aggregates was determined. The in-house prepared nanocrystalline titania was used as a filler in the preparation of Nafion based composite membranes to be used as electrolytes in PEMFCs, with the aim of increasing the operation temperature. The electrochemical performance of such membranes was investigated both in methanol and hydrogen fuelled fuel cells. 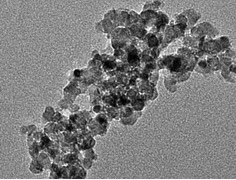 All the Membrane Electrode Assemblies (MEAs) prepared with the membranes of different composition were capable to operate in a DMFC up to 145°C, a temperature much higher than that reached by a bare Nafion recast membrane.
Figure 3 shows, again as a representative example, the polarization (a) and power density (b) curves obtained for the DMFC prepared with such MEAs with a 2 M methanol solution feed at the anode, and using oxygen as oxidant. A maximum power density of 350 mW cm-2 was reached at a current density of about 1.1 A cm-2 with the membrane containing 5 wt% TiO2. Moreover, the cell was subjected to a one month cycled operation (6 hours per day including start up and shut down procedures) without significant performance decrease. The presence of the fillers contributed to stabilize the polymer morphology at high temperature and inhibited the direct permeation of reaction gases by modifying the transport pathways [7]. 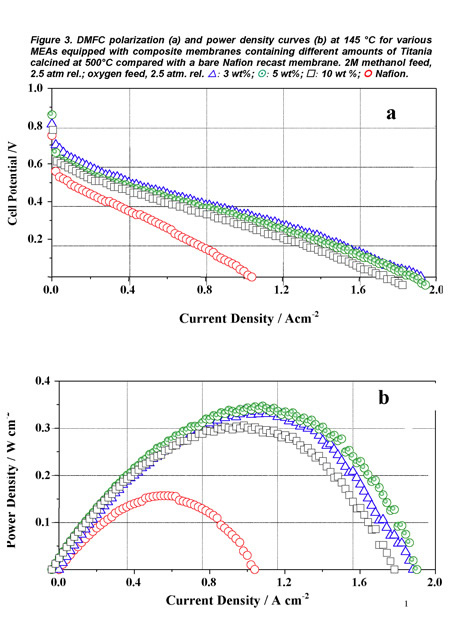 Operation at temperatures above 100°C is needed also for hydrogen-fuelled polymer electrolyte fuel cells, both for direct hydrogen (DH-PEFC) and processed hydrogen (PH-PEFC) cells, to enhance reaction kinetics, reduce heat-exchange requirements and, in PH-PEFC, increase CO tolerance. We have thus studied the electrochemical performance of a Nafion based composite membrane, containing 3 wt% nanometric TiO2 calcined at 400°C [8].
Table I summarizes the water uptake and ion exchange capacity (IEC) of the nanocomposite membrane compared with the values relative to a pure Nafion recast membrane prepared in the same experimental conditions and a commercial Nafion 115 membrane. The water uptake and ion exchange capacity of the composite membrane were significantly higher than those determined for the reference pure Nafion recast membrane, while commercial Nafion 115 gave intermediate values

Arylene main chain polymers have receive a great deal of attention as possible alternative to perfluorinated systems mainly because of their lower cost and their ease of functionalization [9,10]. Among the different polymers, we focused our attention on sulfonated polyetheretherketone (SPEEK, Figure 6).density curves obtained for the two membranes at 100°C and those relative to the nanocomposite membrane at 130°C. A power density of 0.514 mW cm-2 was recorded for the composite membrane versus 0.354 mW cm-2 obtained with Nafion 115 at 0.56 V and 110 °C. Most important is to notice that while the pure Nafion membrane was damaged at temperatures above 100°C, the composite membrane continued to operate up to 130°C reaching a power density of 0.254 mW cm-2 at 0.5 V. Tests were also carried out in a PH-PEFC. The cell was fed with steam reforming synthetic fuel (SR: 10 ppm CO; 20% CO2; 75% H2; 1% CH4). Figure 5 shows a comparison between polarization curves at 110°C in pure hydrogen and SR for the nanocomposite membrane. For both fuels, the measured OCV values were good, almost reaching 1 V. A power density value of about 182 mW cm-2 at 0.6 V in synthetic fuel, versus the 366 mW cm-2 value measured in pure hydrogen, was obtained. 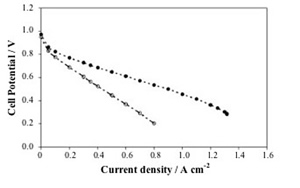 Although the performance for tested MEA fed with SR is lower by about 50% if compared to the performance in pure hydrogen, it is reasonable to assume that the use of suitable electrodes containing Pt-Ru as an electro-catalyst would minimize such loss. Nevertheless, it appeared evident that the filler exerts a beneficial effect in allowing operation at T > 100 °C even in SR fuel.

Even if at high degree of sulfonation (DS), its conductivity is large enough to meet the requirements needed for application in PEMFCs, its mechanical properties tend to progressively deteriorate with sulfonation because of the absence of significant hydrophilic-hydrophobic separation that results in very narrow and poorly connected water channels and large separation between the sulfonic acid groups [10,11]. To attain the correct balance between the hydrophilic and hydrophobic components we prepared nancomposite membranes containing hydrated tin oxide, a filler that is proton conducting in its own right and to decrease the polymer DS.

The procedure used to synthesize SnO2 x 1.5H2O allowed to obtain nanosized particles. Figure 7 shows the typical SEM micrograph of the as prepared SnO2 x n(H2O) powder. As typical morphology for hydrated compounds, the powder was made of soft agglomerates. Numerous SEM observations allowed to measure the unit particles in the nanometric size range (5-15 nm). Such a small particle size is expected to ease the formation of homogeneous composite membranes. 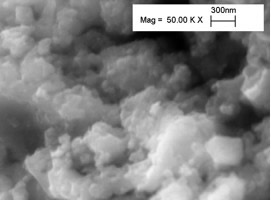 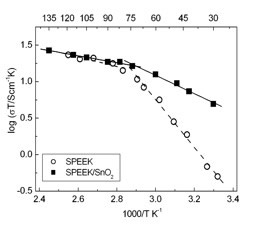 Figure 8. Arrhenius plots of the unfilled SPEEK and SPEEK/SnO2 composite membranes at 100% RH.

In agreement with electrochemical data, λ of the composite membrane was larger than the λ value of the SPEEK membrane below 60°C, temperature at which the λ values of the two samples became the same.
The overall reduced swelling of the composite membrane can be explained assuming that the filler induces morphological modification of the membrane and that the oxide hydration water molecules generate a connection between the polymer sulfonic acid moieties, creating different hydrophilic paths that favor proton transfer [12]. The effect becomes negligible at higher temperature when a decrease in the interactions between polymer chains is known to favor a greater hydration of the polymer [13]. The reduced swelling and higher morphological stability of the composite resulted also in improved membrane performance in terms of durability.
The electrochemical performance of the membranes was tested in a home-made prototype DMFC single cell (Figure 9), acquiring polarization curves.

Figure 10 shows the polarization and power curves for the SPEEK/SnO2 composite membrane in a DMFC test at 100 °C, compared with a recast Nafion membrane. As already mentioned, Nafion is the most widely used electrolyte for DMFCs, even though it exhibits high methanol permeation rate as well as a drop in proton conductivity at temperatures larger than 80°C. The I-V curves clearly showed the improved performance of the composite membrane with respect to the Nafion membrane. The open circuit voltage (OCV) for the composite membrane (0.70 V) was larger than that of unfilled SPEEK (0.65 V) and reference Nafion (0.59 V). The polarization curve of the unfilled SPEEK membrane is not shown due to its lower stability in terms of proton conductivity as a function of time. This finding shows that the use of a SPEEK membrane allowed to reduce the methanol crossover with respect to Nafion. Moreover, the presence of tin oxide allowed a further reduction of the methanol crossover. 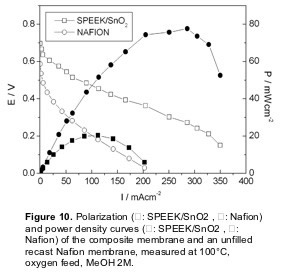 These results converge to indicate that filling SPEEK membranes with hydrated tin oxide allowed to improve the membrane stability, as well as to decrease its methanol permeability. These features led to an enhancement of cell performance of the composite membrane with respect to our reference Nafion recast membrane, pointing out that SPEEK/SnO2 membrane is a promising electrolyte for DMFCs.

The use of organic/inorganic hybrid membranes has been demonstrated to be effective in achieving good electrochemical performance of PEMFCs at temperatures above 120°C, fed either with processed hydrogen, steam-reformed hydrogen, and methanol.
This research represents some of the results of collaborative efforts of different Italian and foreign Institutions under the framework of MiUR-FISR, MAE-Joint Laboratory and EU-Coordinative Action Projects.

Co-authors of the study