Collaborative research among scientists from Italy – the Nast Centre for Nanoscience Nanotechnology and Innovative Instrumentation, UK – ISIS Spallation Neutron Source – have studied the single particle microscopic dynamics of helium atoms (3He, 4He) in bulk and confined in silica nanopores, using Deep Inelastic Neutron Scattering (DINS) at the ISIS

Due to its light mass, its zero-point energy is large compared to thermal motions, Helium occupies a special role in condensed matter. The combination of the high zero-point energy with the weak inter-atomic forces gives to helium a unique property: it is the only element in nature with no liquid-solid transition at T=0 K (at atmospheric pressure). For this reason, quantum effects can be observed. On the other hand, other elements have strong interatomic forces or lower zero-point energies and usually their crystallization occurs at a freezing temperature well above that one at which quantum phenomena start to become significant. In the study of helium it is therefore of paramount importance to consider quantum effects, such as exchange effects and increasing of the mean kinetic energy due to the localization (Pauli principle). Moreover, condensed 4He, 3He and helium isotopic mixtures represent the simplest prototype examples of many-body systems, i.e. interacting bosons (4He) and fermions (3He).

Due to confinement or localization effects the <EK> value for helium in nanopores is expected to increase with respect to the value in bulk. In order to see this effect, one usually exploits two kinds of localization: a confinement obtained by adding 3He atoms to 4He, and a space confinement, using nanoporous systems. 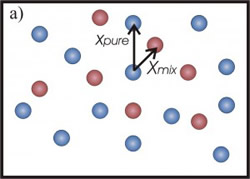 In the first case (Fig.1-a), the 3He atoms border the 4He in a smaller space and the <EK> of the heavier isotope increases. A similar effect should be expected also for 3He mean kinetic energy. However, in this case it has been shown (C. Andreani, C. Pantalei, R. Senesi, “Mean kinetic energy of helium atoms in fluid 3He and 3He-4He mixtures”,Journal of Physics Condensed Matter (2007)) that the lighter isotope seems not to be affected by the presence of the 4He atoms and its kinetic energy seems to be independent of the mixture density. This behaviour can be explained by taking into account exchange effects: the 3He atoms interact with the same kind of isotope, feeling the effect of a density less than that one of isotopic mixture (fig.1-b). 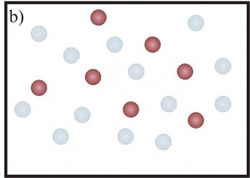 Figure 1: a) Picture of 4He atoms (blue circles). With the addition of 3He atoms (red circles) the mean distance, among a helium atom and its neighbours, decreases (from xpure to xmix). The 4He atom is more localized and its mean kinetic energy increases. b) The 3He atoms is not affected by the presence of the 4He atoms (represented as transparent blue circles).

The other way to localize helium atoms is to confine them in porous powders with mean diameter of pores in a nanometric scale. Several efforts have been devoted to exploring the effect of this kind of confinement on the dynamics of 4He. Studies of adsorption of helium on a variety of surfaces have provided a wealth of information on the behaviour of low-dimensional quantum solids and their interaction with substrates.

The present study (C.Andreani, C. Pantalei, R. Senesi, ”4He adsorbed in cylindrical silica nanopores: size-effects on single atom mean kinetic energy”, Phys. Rev B, 75, 064515 (2007))had the aim of deriving the single-particle mean kinetic energy <EK> of 4He adsorbed in cylindrical silica nanopores (xerogel) for different pore diameters, namely, 24 Å and 160 Å. This study allowed to derive the dependence of single-particle dynamics on pore sizes, layer coverage, and geometry of the confining system.

Notes to editors. Other inelastic neutron scattering studies at high wavevector performed on liquid and solid 3He and 4He, and on 3He–4He mixtures via Deep Inelastic Neutron Scattering (DINS).