The Pulsed Laser Deposition technique is used in these experiments in conjunction with micro and nanopatterning techniques to produce very high density arrays of localized active biomolecular layers. Such patterned layers of homogeneous or heterogeneous biomolecules are particularly interesting for the accomplishment of high density biosensing arrays.

The technique is described in Figure 1. To achieve the best yield in the activity of deposited biomolecules, these are pulsed laser ablated from a frozen solution target maintained at approximately 150K on the tip of a liquid nitrogen cooled cold finger cryostat in vacuo (pressure is approximately 10-3 mbar). The tip faces the optical window of the vacuum vessel and is exposed to the laser beam pulses, mildly focussed by a 30 cm focal length lens. The solution is doped by a suitable molecule absorbing in a wavelength range away from the absorption of proteins (salicylaldeheyde, 330 nm – 360 nm) and irradiated by the third harmonic of a Q-switched Nd-YAG laser (355 nm). This maximizes sublimation preserving the proteins. The target surface is visually inspected during ablation by a stereoscopic microscope. 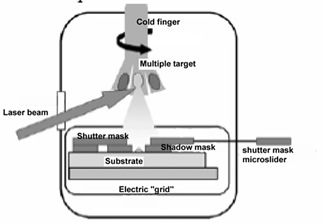 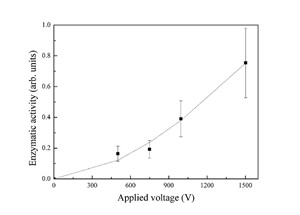 The ablated molecular jet is highly ionized and is thus subject to a static electric field applied between target and substrate, driving the ions to the deposition substrate. Micrometric patterning is achieved by a shadow mask fixed on the substrate and by a microtranslated shutter mask selecting the locations to be coated. On the other hand, nanometric patterning was only attempted with the enzyme horseradish peroxidase by electron beam lithography of a polimethylmethacrilate film, followed by pulsed laser deposition and by liftoff in acetone.

A multiple tip rotary cold finger allows three different molecular species to be ablated in a single vacuum run. The formed layers are found to be biologically functional; in the case of the enzyme horseradish peroxidase in particular, biological activity is assessed by measuring the absorption of the enzymatic reaction products, namely the absorption of the enzymatically oxidized substrate ABTS; the enzymatic activity of horseradish peroxidase coated specimens is found to increase strongly with the applied field as reported in Figure 2, due to better collection on the sample and to little damage of the protein structure in spite of the energetic impact. These data suggest that not only ablated neutral proteins, but also ionized molecules accelerated to the surface retain their biological activity. Above 1500 V electrical discharge easily occurs with our setup, which destroys the molecular layer, so that very little or no biological activity is detected on the sample. 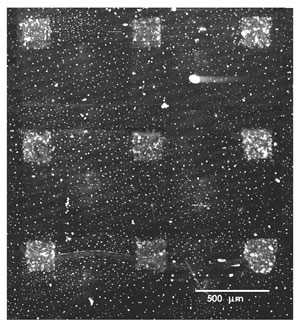 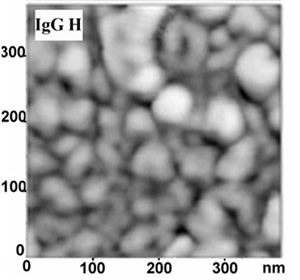 Fig. 4 (left) is an AFM detail of the layer structure, showing clustering of Immunoglobulines G, that have a size of approximately 3×7 nm, into larger lumps; only few of the observable structures have sizes comparable to that of single Immunoglobuline molecules. The layer thickness, as measured on manufactured step edges is between 5 and 10 nm, corresponding approximately to 2-3 stacked molecules. 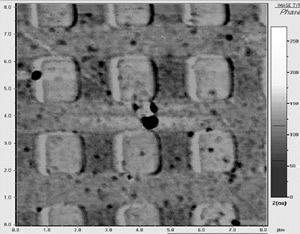 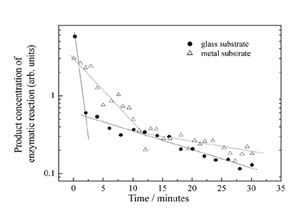 The decrease of the enzymatic activity of a coated specimen repeatedly rinsed in a water solution supplies a qualitative measure of the adhesion of the laser deposited molecules onto the surface. Figure 6 reports such biological activity decrease for layers deposited on a glass and on a stainless steel surfaces.
Two important features should be observed. Both substrates show a dual beaviour, a fast decrease at first followed by a much slower decrease. Secondly, the metal substrate shows a slower biological activity decrease with respect to the glass substrate; the adhesion of the laser deposited layer is thus higher on metal than on glass. We believe this behaviour is due to the fact that the effective electric field between the molecular source and the glass substrate quickly decreases while deposited ions charge up the surface. Therefore the average kinetic energy of the molecules is lower when they impact on the glass substrate than on the metal one. The deformation of the proteic globule, which we believe to allow a high number of weak interactions to be established, is consequently higher on metals, giving rise to better adhesion. AFM measurement of the layer thickness with increasing rinsing time shows that the thickness decreases very quickly at first, soon reaching a value of approximately 5 nm, very close to the monolayer value. The rinse time necessary to reach the monolayer always corresponds to the time needed to reach the slope change in the above plot. The monolayer is then much harder to remove from the surface, and the enzymatic activity of the specimen consequently is well detectable after 24 hours.
To show that this methodology can indeed supply heterogeneous biosensing arrays of micrometrically resolved thin film islands of different active proteins, we fabricated a simple immunosensing microarrays using two different immunoglobulines (IgG human and IgG mouse); of each we deposited three spots at random in a 3×3 matrix, while the remaining three locations were coated by a platinum thin film for control of the mask alignment. The platinum spots are visible by an ordinary microscope in light field while they are non fluorescent under excitation in the blue and green region. The specific antibodies for the IgG Human and IgG Mouse molecules were tagged with green and red emitting fluorophores respectively and incubated on the laser deposited specimen for 25 min. Fig. 7a shows a microscope image of the specimen in light field, where only the platinum spots are visible, while 7b shows the same specimen after incubation with a solution containing both antibodies and dual excitation at 488 and 514 nm. We find the green and red spots as expected on the IgG Human and IgG Mouse spots respectively, while no emission is visible from the platinum coated locations.