Scientists from NAST Centre are now able to capture previously elusive details about ancient Italian violins, by Amati and Testore, and the Egyptian grave-goods of Kha thanks to a new instrument, IMAT, which has the ability to reveal hidden images of these objects for the first time. The study is performed within the ARKHA project.

IMAT was opened today in the presence of H. E. Pasquale Terracciano, Italian Ambassador in London, by Corrado Spinella, Director of the Department of Physics of the Italian National Research Council (the CNR) and ISIS Director Robert McGreevy, in a celebration of the long-standing partnership between the UK and Italy.

The new imaging capabilities of IMAT enable scientists to access key information on the effects that the choice of different materials in violin has on the sound they produce, as well as the methods used by ancient Egyptians to make vases and alabasters. 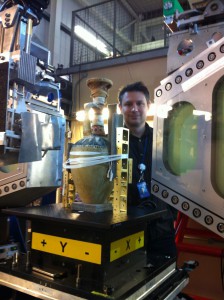 Cultural heritage studies of this kind, along with a number of other research areas, have expanded as a result of the Italian collaboration with the ISIS Neutron and Muon Source, a research facility supported by the Science and Technology Facilities Council. The agreement between CNR and ISIS was originally signed in 1985, making Italy one of the major and longest-standing partners of the research facility.

Today, the relationship between ISIS and Italy was celebrated with the opening of IMAT, the first instrument at ISIS capable of producing 3-dimensional images to reveal the inner workings of components across a wide range of science and technology areas.

H. E. Pasquale Terracciano, Italian Ambassador in London said: “This is a flagship European partnership of which both UK and Italy can be proud. We look forward to the continued success of this partnership far into the future.”

Dr Corrado Spinella, Director of the Department of Physics of the Italian National Research Council (the CNR) said: “It is wonderful to mark this milestone in the relationship between ISIS and Italy. Continued access to ISIS will be a key element of the Italian neutron research infrastructure strategy.”

Professor Robert McGreevy, Director of ISIS added: “We are delighted to be able to celebrate the inauguration of IMAT with our colleagues from CNR and H. E. Terracciano. Our partnership with Italy has brought extensive benefits not just to our two countries but the wider scientific community. The studies taking place today will provide important insights into our cultural heritage. Longer term, we expect to see IMAT enable advances in a wide range of applications, from aerospace, civil engineering and power generation to earth science and agriculture.”

Antonio Stradivari (1644 – 1737) was one of the greatest luthiers of all time. His interpretation of geometry and design for the violin has served as a conceptual model for violin-makers for more than 300 years.

Today a team of scientists from the Italian National Research Council CNR, Tarisio (London), Fondazione Pro Canale (Milan), University of Milano-Bicocca and University of Rome Tor Vergata, are investigating the craftsmanship of ancient Italian violins using neutron beams. The team wishes to explore how the wood, only a few millimetres thick, was used to construct the instrument, and how small details in the finishing and varnishing processes influence the sound production. Due to their peculiar shape and high value, violins are difficult objects to study with standard analytical techniques. IMAT offers a non-destructive method by which the entire instrument can be imaged. These experiments form part of a wider project that aims for the integrated analysis of musical instruments.

More than 3,000 years before Stradivari’s time, between 1425 and 1353 BC, Kha was overseeing the building of tombs for the kings of ancient Egypt. Previously, all that was known about Kha was taken from his mud brick funerary chapel. Until 1906, when an Italian archaeological mission discovered the shaft of Kha’s own tomb that had been sealed by a landslide. It was the richest and most complete non-royal burial assemblage ever found. Kha’s grave goods included coffin tunics, beds, vases and prestigious luxury objects inscribed with royal names, as well as alabaster containers, ceramic vessels and jars for food, oil powders and perfumes, some of which still remain sealed with their contents unknown.

Now, a selection of the Egyptian artefacts taken from Kha’s tomb, including vases and alabasters, are being studied on IMAT as part of the ARKHA project. Using neutron beams, which have a high penetration power in metals, the team will find clues on the methods used by ancient Egyptians to make the bronze vases and pots, as well as the state of their conservation. 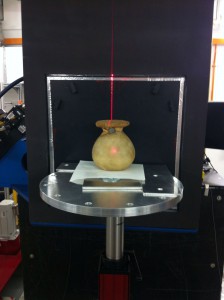 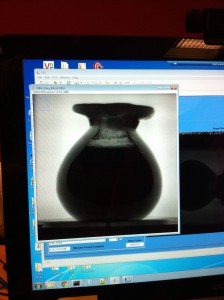 The neutron tomography of a sealed alabaster vessel from the Egyptian Museum of Turin reveals the elemental composition of its contents.

Christian Greco, Director of Museo Egizio said: “On the 2nd of October, 11 vases from the funerary goods of the tomb of Kha have been sent to the ISIS laboratory where they will be studied with the help of neutron beams in order to discover what is hidden inside these precious objects. We strongly believe in the collaboration between archaeologists and researchers in Chemistry and Physics that this project aims at promoting. It is an especially important initiative this year which marks the 110th anniversary of the discovery of the tomb of Kha by Ernesto Schiaparelli, dating back to 1906, because it represents an opportunity to offer to the public new data and useful new results about the objects belonging to our collection”. 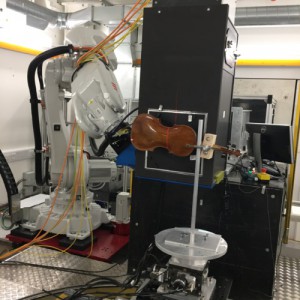 Amati Violin monted on IMAT ready to be scanned

Carlo Chiesa from Fondazione Pro Canale, a Violin maker who acted as a consultant for the project, said: “New analytical methods will help us understand and rediscover techniques that three or four Century ago were a common knowledge in the small community of cremonese violin makers and allowed them to produce the small number of violins that are still unsurpassed for their acoustical properties.”

Prof Carla Andreani, who coordinates the Italian team on behalf of University Rome Tor Vergata added: “The two violins by Amati and Testore became the first ever stringed instruments to be scanned by a neutron beam at ISIS. In a few months, with the combined images produced with the contribution of all the partners of the project, we will be able to complete the elemental analysis using neutron resonances at higher energies and tomography and using thermal neutrons, and provide more complete information on inner structure and morphology of the Violins.” 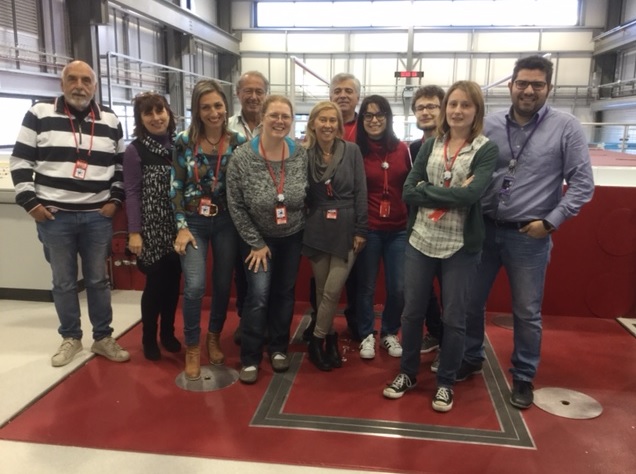 Prof. Giuseppe Gorini from University of Milano Bicocca said: “The collaboration allowed the temporary exportation of the objects from Italy to be analyzed at the ISIS neutron source. Restoration experts – from the Museo Egizio in Turin and Soprintendenza Archeologia del Piemonte – and University researchers worked closely, providing a positive example of multidisciplinary collaboration.”

ARKHA (ARchaeology of the invisible: unveiling the grave goods of KHA) project. Objective of the study is to characterize the “Kha and Merit collection”, by the integrated use of non invasive and non destructive chemical and physical techniques by the integrated use of light and neutron probes. ARKHA combines competences of scientists belonging to different disciplinary fields, i.e curators, restorations, Egyptologists, archeologists, chemists and physicists.

IMAT details
The IMAT beamline is a new instrument at the Science Technology Facilities Council’s ISIS Neutron and Muon Source. It will be the first instrument at ISIS capable of producing 3-dimensional images, revealing the inner workings of components across a wide range of science and technology areas.

The images produced by IMAT will have applications in the areas of aerospace and transportation, civil engineering, power generation, earth sciences, cultural heritage and agriculture. As neutrons can penetrate deeply into materials, IMAT will be capable of producing images of the internal structure of large engineering components. It will reveal, for example, the passage of lubricants and fuel through engine components, and the internal stresses and strains inside welded components.

IMAT has been built using funds provided by the UK government, together with imaging systems developed by Italian scientists from CNR-IPCF, funded through the Italian CNR research council. 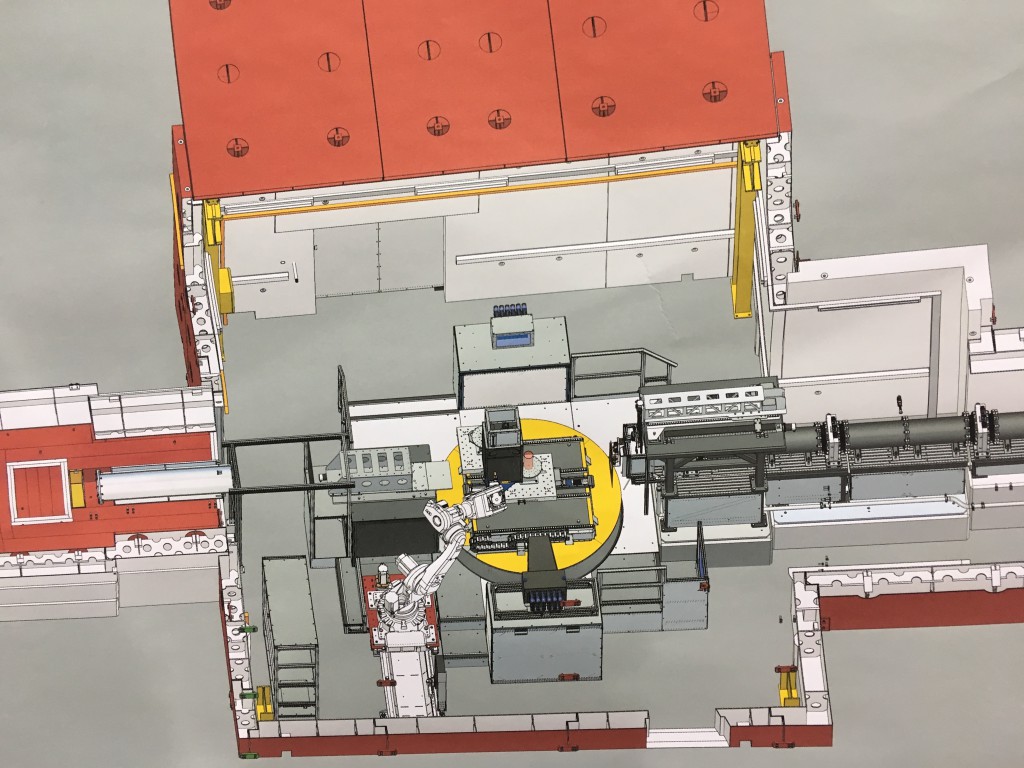