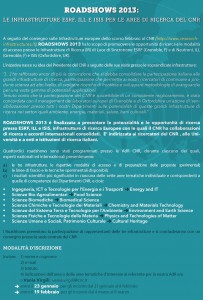 The infrastructure ESRF, ILL and ISIS for research areas of CNR

Following the conference on European Infrastructure last February to CNR, ROADSHOWS 2013 aims to promote research opportunities and how to access at the Research Infrastructures (RI) Synchrotron Light ESRF (Grenoble, F) and Neutron, ILL (Grenoble, F) and ISIS (Oxfordshire, UK). The initiative is based on an idea of ​​the President of the CNR as a result of his visits to the above infrastructure, “[…] I have strengthened even more convinced that we must consolidate the Italian participation in large research facilities, participation in which allows our researchers to continue producing high-level knowledge, to carry out frontier research and develop cutting-edge methodologies for a wide range of potential applicazioni.Tenuto account that the CNR participation is open to a consistent improvement, it has been agreed with the management of European laboratories of Grenoble and Oxfordshire action of ‘awareness’ at all of our departments on the potential of these large research infrastructures in areas such as environment, energy, materials, health, cultural heritage. “

Fourteen roadshows were planned at ADR CNR, during each of which national and international experts will present:
a) the three infrastructures, their mode of access and preparation of experimental proposals;
b) the beam lines and the available experimental techniques;
c) the most significant scientific results in each of the seven subject areas identified and corresponding to those of the CNR Departments skills, namely: