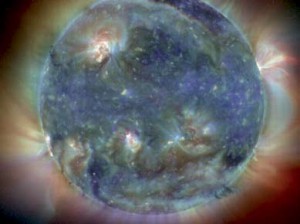 Collaborative research among Italian and British scientists and engineers from Universita’ di Roma Tor Vergata (Nast Centre), CNR (I), ISIS Spallation neutron Source (UK), Universities of Central Lancashire, Padova and Milano Bicocca, and from the avionics and aerospace industries have been using VESUVIO neutron flux and energy spectrum in benchmark activation measurements to demonstrate that it provides a neutron spectrum similar to the ambient one at sea level, but with an enhancement in intensity of a factor hundred .The VESUVIO beam line at the ISIS spallation neutron source UK Facility over the last few months has been set up for neutron irradiation tests in the neutron energy in the MeV range. The neutron production at ISIS relies upon spallation reactions induced by 800 MeV proton bunches, accelerated through a synchrotron. Carla Andreani, Professor of condensed matter at the University of Rome, Tor Vergata, begins the story, “I was collaborating with ISIS on a project developing the VESUVIO spectroscopy instrument when a colleague put me in touch with ST Microelectronics which was look- ing to access the Los Alamos neutron source in the USA. I proposed doing a feasibility study at ISIS instead.” A team the three Italian universities and a team of ISIS, along with ST Microelectronics car- ried out chip irradiation testing on field-programmable gate arrays (FPGA’s) which form the basis of many microelectronic devices.