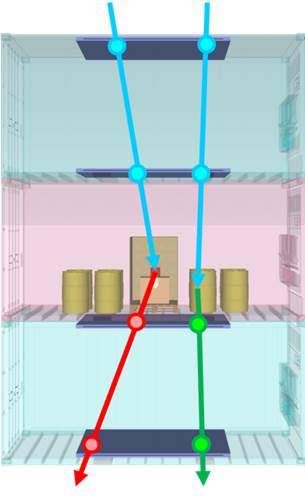 The muons, generated in the highest layers of the atmosphere following the interaction of cosmic rays with it, are charged particles that arrive, at sea level, at a rate of about 10,000 per minute per square meter. Due to the presence of detectors it is possible to identify the incoming trajectory (trace) of an incident muon starting from the interactions inside the detectors placed above the volume to be scanned, each of which offers information on the three-dimensional position in which the muon has crossed each detector. The muons that cross the volume to be scanned, encountering the objects contained in it, are deflected with respect to the original trajectory. The exit trajectory, which is identified by the detectors located below it, is therefore different from the entry one. The physical principle on which the TECNOMUSE muon tomography system is based is the Coulomb multiple diffusion. For this principle, the deflection of the muon trajectory, made by the objects in the volume to be scanned, will be proportional to the atomic number and the thickness of the material composing the objects themselves. The figure schematically describes the idea behind the muon tomography. The incoming muonic traces (in cyan) are deflected by the objects present in the volume under examination according to the geometry and atomic number of the material composing them. The green trace describes a muon that has undergone a minimal deviation from its original trajectory, from which it is deduced that it has passed through an object with a low atomic number. In contrast, the red output trace is characterized by a large deflection compared to the incoming one, and this behavior can be associated with the crossing of an object with a high atomic number. From the measurement of the deflection of all the traces that come from all directions the composition and the dimensions of the objects inside the container are reconstructed