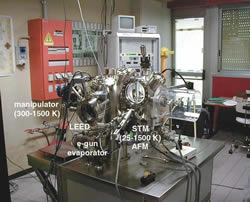 Ge/Si(111) – experiments performed were related to the visualization of the growth by Physical Vapour Deposition of Ge nanostructures on 7×7 Si(111) reconstructed surfaces. By evaporating Ge on Si(111) at T=500°C the formation ofwetting layers have been studied by Scanning Tunneling Microscopy in situ. The evolution of the Ge islands appearing after the wetting layer (completed at 3 ML). The 3D islands appear as truncated tetrahedrons (7×7 reconstructed on the top) and evolves into rounded shape, flat islands with a central hole. An erosion of the substrate around the islands has been also evidenced and measured. The island have lateral dimensions in the range 200 – 500 nm. The statistical distribution of the islands shapes and contact angles has been analysed. On Si step bunched surfaces (obtained by flashing at 1200°C in proper condition the Si substrate) the self aggregation and ordering of the islands has been evidenced. These results have been published in several papers and conference or school proceedings [1-6]. 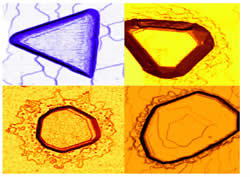 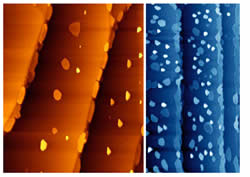 Fig 2. Organization of the Ge islands on a Si(111) step-bunched substrate a) STM image of 2.5 nm Ge deposition on Si(111) at T=450 °C 2.7×3.7 μm2. The total height of the image is 56 nm. b) STM image of 6 nm Ge deposition on Si(111) at T=450 °C 10×10 μm2. The total height of the image is 82 nm.InAs/GaAs quantum dotsThe InAs quantum dots on GaAs were prepared ex-situ by MBE as follows: the GaAs(001) wafer was initially deoxidized in As flux at 640 °C until a weak 2×4 RHEED pattern appeared. Afterwards, the substrate temperature was lowered to 590 °C and an epitaxial GaAs buffer layer of approximately 0.75 mm was grown at a rate of 1 μm/h. After 10 min of annealing, the temperature was further lowered to 500 °C for the InAs growth. The deposition rate was 0.028 ML/s with an In/As flux ratio of 1/15. The InAs coverage was 3 ML (the 2D-3D transition occurs at 1.6 ML). A 50 nm As capping layer is grown on top of the quantum dots, in order to protect the surface during the transfer to the AFM/STM chamber if atomic resolution and reconstruction have to be obtained by STM. The other samples are grown on intrinsic GaAs exhibiting a resistance too high to be imaged by STM, so the measurements are normally performed by AFM. Many samples, with different InAs coverages and growth modes have been prepared and measured. The size and distribution of the dots obtained in various growth conditions have been measured. Two main growth modes have been analysed: Continuous (the In flux was never interrupted) and Migration Enhanced (the In flux was interrupted at regular intervals, in order to increase the atomic movements ad aggregation on the surface). The island size increases in the Migration Enhanced mode. The onset of the quantum dot formation has been evidenced by also by STM, by imaging 2D islands after which act as precursors. The results have been published in two papers [7-8] 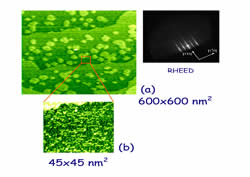 Fig 3. STM images at 1.3 ML of InAs on GaAs(001); a) 2D-islands of average height 0.4 nm (precursors); b) high resolution image of the wetting layer. The RHEED image has been acquired in the MBE system at the end of the growth. 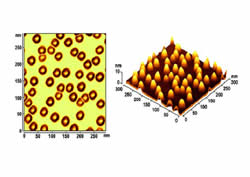