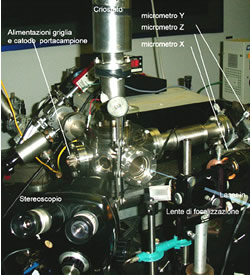 The technique is based on a small turbomolecular pumped vacuum vessel with access for the laser beam (1064, 532, 355 and 266 nm from a Q-switched Quantel Brilliant b laser), an optical port for stereomicroscopic visual inspection of the ablation sample, an electrostatic deflection system to discriminate between ablated neutrals and ions, a manually microtranslated (XYZ) mask holder, and a liquid nitrogen cooled cold finger cryostat. The available setup is reported in Figure 1.

Figure 1 – The Pulsed Laser Depostion (PLD) equipment has the possibility to micrometrically translate the sample or the shadow mask in order to achieve micropatterned depositions, and to ablate biological samples from frozen solutions. Other micro or nanopatterned deposits can be obtained by e-beam lithography (A. Gerardino, CNR-IFN).

The possibility to steer ionized atoms and molecules out of the ablated neutral beam and address ions on a surface along a trajectory at right angle with respect to the ablation direction allows accomplishment of extremely uniform growth at very low growth rates. This has produced recently very uniform and thin metal layers. Figure 2 reports a lithographically fabricated pattern of platinum squares as imaged by SEM (left) and by AFM (right).

The Pt layers we obtain by PLD are extremely thin and uniform. In this AFM scan we have an atomically uniform, 9 Angstrom thick layer, while Figure 3 reports a detail of one such square showing the step height and thickness.

The associated histogram reports the height distributions of the topographic image for both the uncoated native silicon oxide on silicon and for the platinum coated part. 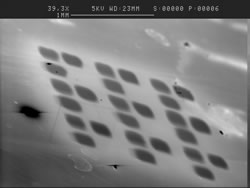 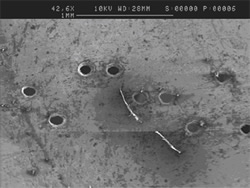 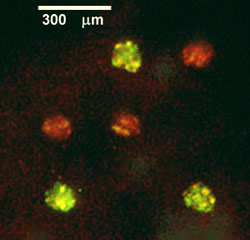 We can see that the step height is 9 Angstrom, while the distribution width of the substrate and of the deposition is identical, showing that the Pt coat does not contribute to the substrate roughness. The same apparatus is used for micropatterned metal deposition (Figure 4) and “soft” biomolecule deposition (Figure 5) using microtranslated shadow masks. Furthermore, visual microscopic control of the laser spot on the target allows quick and easy fabrication of micrometric shadow masks (Figure 6). Platinum micropatterned PLDs on Si as imaged by SEM on the left. On the right, selectively coloured luminescence from chromophore tagged antigens reacting with Pulsed Laser Depositions of their specific antibodies (confocal microscopy). Pulsed Nd-YAG laser drilled shadow mask on 100 micron thick stainless steel blade.